MALAYSIA has hit the international headlines again. Perhaps not in the way we would wish. The Age and theSun newspapers “revealed” a superlative excess sum paid out by Mara to buy a building in Melbourne to accommodate its bumiputra students – by some RM4.75 million.

Other “revelations” speak of an excess RM61 million for two other properties. The reports have yet to be proved.

The first transaction was allegedly channelled through shelf companies in the British Virgin Islands and Singapore. Another embattled government-backed entity also did transactions via Cayman Island and later Singapore.

This implies that monies arising out of these dealings were channelled outside Malaysia and landed up in people’s accounts. END_OF_DOCUMENT_TOKEN_TO_BE_REPLACED 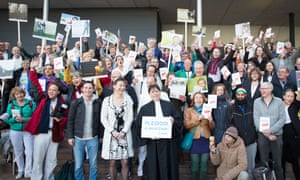 June 24, 2015 — A court in The Hague has ordered the Dutch government to cut its emissions by at least 25% within five years, in a landmark ruling expected to cause ripples around the world.

To cheers and hoots from climate campaigners in court, three judges ruled that government plans to cut emissions by just 14-17% compared to 1990 levels by 2020 were unlawful, given the scale of the threat posed by climate change.

Jubilant campaigners said that governments preparing for the Paris climate summit later this year would now need to look over their shoulders for civil rights era-style legal challenges where emissions-cutting pledges are inadequate.

“Before this judgement, the only legal obligations on states were those they agreed among themselves in international treaties,” said Dennis van Berkel, legal counsel for Urgenda, the group that brought the suit.

“This is the first a time a court has determined that states have an independent legal obligation towards their citizens. That must inform the reduction commitments in Paris because if it doesn’t, they can expect pressure from courts in their own jurisdictions.”

In what was the first climate liability suit brought under human rights and tort law, Judge Hans Hofhuis told the court that the threat posed by global warming was severe and acknowledged by the Dutch government in international pacts. END_OF_DOCUMENT_TOKEN_TO_BE_REPLACED