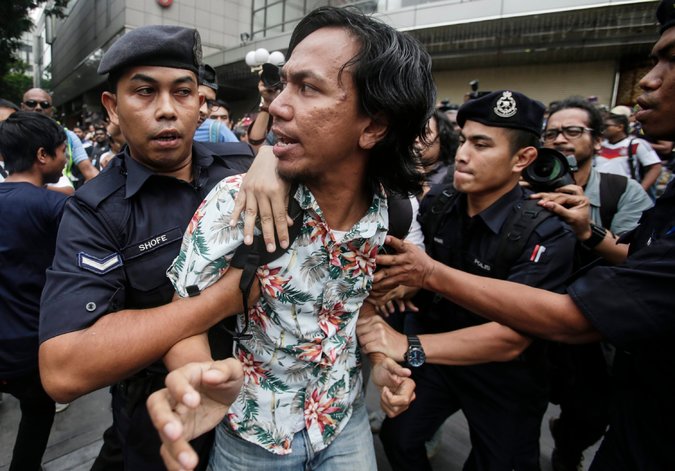 A protester calling for Prime Minister Najib Razak to resign being arrested at a rally in Kuala Lumpur earlier this month. Credit Fazry Ismail/European Pressphoto Agency

KUALA LUMPUR, Malaysia — Malaysia’s ruling party is facing its greatest crisis of legitimacy yet. Long seen as a modern and moderate Muslim democracy, Malaysia has been riding on its economic growth and good diplomacy for years, and the United Malays National Organization (UMNO), which has led coalition governments for nearly six decades, has been claiming the credit.

But rampant corruption, curbs on freedom of expression, a slowing economy and a currency in free fall have eroded public trust in the government’s stewardship. It hasn’t helped that Prime Minister Najib Razak recently reshuffled the cabinet, and sacked the deputy prime minister and the attorney general for asking uncomfortable questions. Or that once again the ruling coalition, Barisan Nasional (BN), is using its influence over government agencies to bypass or manipulate electoral rules to its advantage, most recently through gerrymandering in the eastern state of Sarawak. END_OF_DOCUMENT_TOKEN_TO_BE_REPLACED