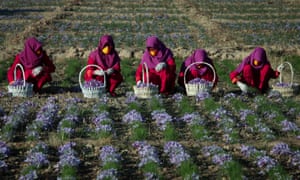 Afghanistan, like countries in the Middle East, north Africa and elsewhere in south Asia, has laws that limit the ability of women to work and move freely. Photograph: Hoshang Hashimi/AP

About 155 countries have at least one law that limits women’s economic opportunities, while 100 states put restrictions on the types of jobs women can do and 18 allow husbands to dictate whether their wives can work at all, according to a World Bank report that paints a stark picture of the enduring obstacles women face in achieving economic empowerment.

Of the 173 countries studied for the report, entitled Women, Business and the Law 2016: Getting to Equal, 32 require women to get permission from their husbands to apply for a passport and 22 do not allow married mothers to confer citizenship on their children. Thirty states have legislation that designates men household heads, while women in 19 countries are legally obliged to obey their husbands.

More positively, over the past two years, 65 countries – the majority developing states – have made 94 reforms to their statute books to improve gender parity. There has also been progress in tackling violence against women: 127 countries now have laws on domestic violence, compared with just seven 25 years ago.

Countries including Canada, Peru and Namibia, were among 18 found to have no legal restrictions on women in the seven areas studied.

The report, published on Wednesday, coincides with the 20th anniversary this month of the landmark Beijing platform for action, which committed 189 countries to address gender disparities in 12 critical areas. The Beijing declaration, agreed at the fourth world conference on women in 1995, promised a world where women could earn equal pay for equal work, live free from violence, have access to decent healthcare and education, and have a say in decision-making. The report highlights the gaps that remain between paper promises and daily realities.

Countries in the Middle East and north Africa had the most discriminatory laws, particularly around women’s ability to work or move freely. But south Asian countries, including Afghanistan, Bangladesh and Pakistan, were also found wanting, having made the fewest reforms over the past two years.

Researchers found that 41 countries prohibit women from working in certain factory jobs, while 29 do not allow women to work at night. In Russia, for example, women are barred from 456 jobs.

Only half of the countries studied offered paternity leave, and less than a third had provisions for parental leave, putting the onus for childcare on women.

In 35 countries, women do not have the same inheritance rights as men when their spouses die. Even when there are laws in place, women are often pressured to give up their inheritance, the report says.

In countries that restrict a woman’s ability to make economic decisions, girls are less likely to finish secondary school and their prospects of running or managing a business are diminished, which is bad economics, says the World Bank. If a woman does manage to get a job, she is likely to earn less than a man.

According to a chart published at <http://www.theguardian.com/global-development/2015/sep/09/women-business-and-the-law-2016-getting-to-equal-world-bank-report>, Malaysia has over 15 laws which limit women’s economic opportunities

The report, published every two years, looks at data on seven indicators – accessing institutions, using property, getting a job, providing incentives to work, going to court, building credit and protecting women from violence.

This year’s report includes data from 30 more countries than the preceding 2013 edition. The latter found that 90% of countries had at least one law that impeded women’s economic opportunities. The same percentage is recorded in this year’s edition, despite the inclusion of 20% more countries.

“I thought that would change,” says the lead author, Sarah Iqbal. “That was quite significant. I felt for sure that that finding would not hold up, and we got exactly the same finding. It shows this is pervasive across the world.”

But Iqbal adds that studying legal and regulatory data from the past 50 years showed positive change often came after international human rights treaties, or after agreements like the Beijing platform for action or the Maputo protocol were signed. “It makes a difference,” she said, adding that she hoped to see more progress over the next two years following the adoption of the sustainable development goals, and their commitment to gender equality, later this month.

Legislation, however, is just the first step in a long chain to effective implementation and women’s empowerment, says Iqbal. It’s a process that can’t be rushed. “We encourage countries to develop at a pace that’s comfortable for them … local context matters,” she says. “Countries are moving in a positive direction.”