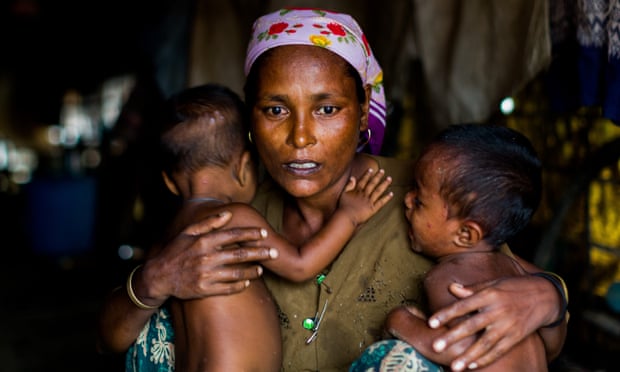 Shamijder, a Rohingya refugee, with her one-year-old twins. An estimated 110,000 Rohingya live in an overcrowded camp on the outskirts of Sittwe, Myanmar. Photograph: Anadolu Agency/Getty Images

Human traffickers will resume their brutal trade across southeast Asia despite a regional crackdown, Amnesty International has warned, as it detailed the “hellish” abuses migrants have suffered at the hands of gangmasters.

Tens of thousands of persecuted Myanmar Rohingya Muslims and Bangladeshi economic migrants have fled across the Andaman Sea in recent years, usually to Malaysia, as part of a lucrative trade controlled by smuggling gangs.

Crossings tend to halt over the dangerous summer monsoon season and restart in October, while the people smuggling trade was thrown into disarray earlier this year by a crackdown on gangs in Thailand.

But Amnesty says that crackdown and promises by regional governments to address the crisis have done little to dismantle criminal networks or persuade people against making the crossings.