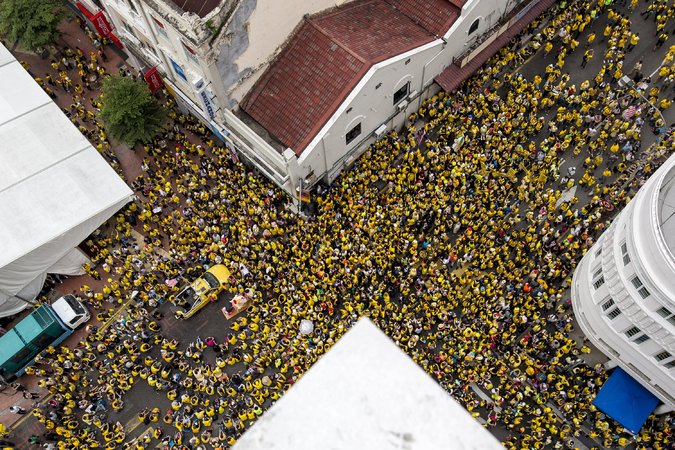 A lawyer representing the group, New Sin Yew, said that under the edict, shirt wearers could be fined about $1,185. Some people have been briefly detained for wearing the shirts, he said, but he was unaware of anyone being prosecuted or fined.

A Malaysian government spokesman declined to comment on the case but insisted that citizens were free to speak their minds.

“The reality in Malaysia is that there is freedom of expression without fear of prosecution,” he said, speaking on the condition of anonymity. “Online and in print, the media is freer than it has ever been.”

The huge transfer of funds to Mr. Najib’s account has been reported to have come from companies linked to a sovereign wealth fund, 1Malaysia Development Berhad, or 1MDB. Mr. Najib set up the fund and is the chairman of its advisory board.

Mr. Najib has not publicly explained the source or purpose of the money, although he has denied wrongdoing and said that he took no money for personal gain.

Bersih 2.0 urged the prime minister to step aside while the unusual transactions were investigated.

Instead, Mr. Najib has used his authority to derail government investigations, including removing the attorney general before he could conclude his investigation and firing a deputy prime minister who questioned the transactions.

In January, his newly appointed attorney general, Mohamed Apandi Ali, announced that he had closed the investigation after finding that no laws had been broken. A statement released by Mr. Apandi’s office said the prime minister had returned $620 million of the donation because it had not been used.

Investigations of the bank transactions continue in the United States and Switzerland, among other countries.

“What we are seeing is the concentration of power in the hands of one man,” said Tony Pua, who is a member of Parliament and an opposition leader and wore his Bersih 4 shirt to the August rally. “For the government to ban a T-shirt that means ‘clean’ is a farce.”

The number 4 signifies that the demonstration was the fourth organized by the group. The government also banned Bersih 2 shirts, Ms. Abdullah said, though shirts from the group’s first and third events have survived unscathed.

T-shirts are not the only object of the government’s ire.

A graphic artist who posted a picture online of Mr. Najib as a clown has come under police investigation for violating a national communications law. The artist, Fahmi Reza, said the picture was protesting corruption.