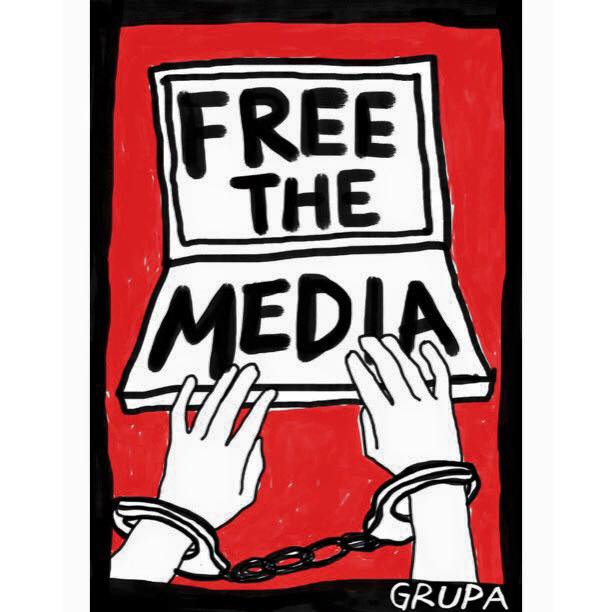 An activist group of graphic artists in Malaysia has launched an online poster campaign to demand media freedom after the government ordered the closure of several websites and blogs that have been reporting about a corruption scandal involving the prime minister.

We feel that the time has come for Malaysians to demand for media and internet freedom in light of the latest assault on freedom of speech in Malaysia. It is thanks to such tactics many journalists from independent portals face a tough time when covering ruling party lawmakers and the reporters from the mainstream media are often dubbed government lapdogs.

Since January, the Malaysian government has blocked three news websites and three socio-political blogs. It blocked the Medium and Asia Sentinel news websites for carrying a report originally published by Sarawak Report about the corruption scandal involving Prime Minister Najib Razak. The Sarawak Report was banned in Malaysia in 2015. Two weeks ago, The Malaysia Insider was blocked for allegedly posting an ‘unverified’ information regarding the corruption case of Najib.

Najib is accused of receiving more than 600 million US dollars from a state-run investment firm. Najib denies this and claims that the money in his banks was a political donation from a royal family in the Middle East. The issue sparked massive protests in Malaysia and some of Najib’s allies even called for his resignation. END_OF_DOCUMENT_TOKEN_TO_BE_REPLACED

A group of children from an indigenous minority group escape an abusive boarding school to make their way home to their families, hiding from search parties along the way. The latest example of this all-too-familiar narrative has a more heartbreaking ending than the 1931 journey by a trio of Australian Aboriginal girls portrayed in the movie Rabbit Proof Fence.

Six girls and one boy, aged seven to 11, from the Temiar indigenous ethnic group, went on the run from a government boarding school in Gua Musang, Malaysia on 23 August 2015. The children evaded searchers until 9 October when Norieen Yaacob, 10 and Mirsudiar Aluj, 11 were located alive. Although emaciated and weak, the girls still tried to walk away from the police who found them on a riverbank.

As the Center for Orang Asli Concerns, an indigenous peoples advocacy group in Malaysia described it, the children had been “not missing, but hiding.” The other five had died from drowning or starvation.

Taking children away from their parents to be indoctrinated in schools that deny them their culture, language and spiritual beliefs is considered a crime against humanity and a practice of decades past. Governments in Australia, Canada and the United States have apologised for it (although not properly compensated victims). END_OF_DOCUMENT_TOKEN_TO_BE_REPLACED

KUALA LUMPUR, March 3 — Malaysia upholds the right to free speech and information, but its people are accountable for how they practise it, Wisma Putra said today in response to Washington DC’s recent concern over a perceived crackdown on local media.

In defence of the government’s ban on local news portal The Malaysian Insider (TMI), the Foreign Ministry said the decision had been made with due consideration to safeguard the country.

“While Malaysia upholds the freedom of speech and right to information, such freedom and right must be exercised responsibly and with accountability.

“The Government of Malaysia has a responsibility to maintain peace, stability, and harmony in the country and to safeguard the multiracial and multicultural values, norms and practices in Malaysia,” the ministry said in a statement issued late tonight. END_OF_DOCUMENT_TOKEN_TO_BE_REPLACED

The #TakNakDiktator campaign coalition today reminded the government to honour the Conference of Rulers’ call for the National Security Council (NSC) bill to be refined.

Their statement comes ahead of the next Parliament session which begins on Monday.

Speaking on behalf of the group, former Bar president Ambiga Sreenevasan also thanked the Malay rulers for not signing off on the bill as yet.

“We note that according to the federal gazette, the Yang Di Pertuan Agong has not yet given his royal assent to the NSC Bill even though it has been over two months since the bill was passed by the Dewan Negara.

“We welcome the prudence of the Conference of Rulers to uphold the separation of powers that is essential to preserving democracy in Malaysia,” she said in a statement today. END_OF_DOCUMENT_TOKEN_TO_BE_REPLACED

PUTRAJAYA, March 3 — The Court of Appeal here today granted leave to the Penang Government to commence a judicial review to challenge the Home Ministry’s order in declaring the Voluntary Patrol Unit (PPS) as an illegal organisation.

The judge also ordered the case to be remitted to the high court for case management (to set a date for inter partes hearing on the merits of the judicial review).

She also granted an application by counsel Tommy Thomas, who informed the court that the state government was not seeking legal costs, for the case to be heard before another judge. END_OF_DOCUMENT_TOKEN_TO_BE_REPLACED

PETALING JAYA: Freedom of speech and the expressing of one’s opinion must be treated as a privilege rather than an absolute right, says Datuk Seri Dr Salleh Said Keruak.

“And privileges, if abused, can sometimes be withdrawn. There is no such thing as absolute freedom of speech,” the Communications and Multimedia Minister said in a blog post on Thursday.

END_OF_DOCUMENT_TOKEN_TO_BE_REPLACED

File photo shows a man walking past a 1MDB billboard in Kuala Lumpur. The tabling of the final 1MDB audit report before the PAC has already been delayed twice and has now been classified under the OSA. — Picture by Yusof Mat Isa

KUALA LUMPUR, March 3 — The final federal audit report on 1Malaysia Development Berhad (1MDB) has been classified under the Official Secrets Act (OSA) 1972, even though it is scheduled for tabling before a parliamentary committee, two sources have disclosed.

Malay Mail Online also understands that Public Accounts Committee (PAC) members will not be allowed to take home the 300-page report on the controversial state investment fund that is set to be tabled before the PAC tomorrow.

“The 1MDB report is registered with the National Security Council as OSA,” one source told Malay Mail Online yesterday.

The source added that in contrast, the previous preliminary report on 1MDB by Auditor-General Tan Sri Ambrin Buang, which had not been made public, was not classified under the secrecy law.

PAC members were previously allowed to bring home the preliminary 1MDB audit report, which was submitted to the parliamentary committee last July, although the report had security tags, according to the source.

The tabling of the final 1MDB audit report before the PAC has already been delayed twice. END_OF_DOCUMENT_TOKEN_TO_BE_REPLACED