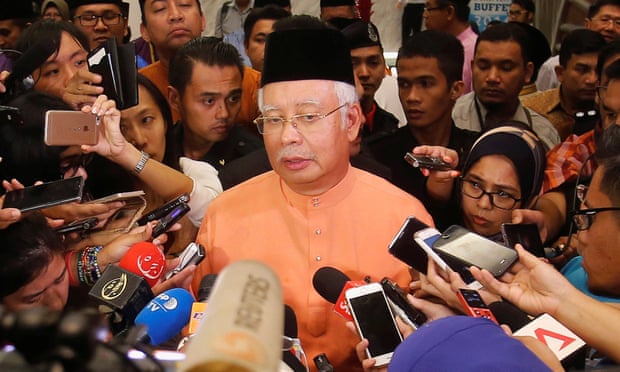 Malaysia’s prime minister Najib Razak. ‘Even his erstwhile patron, former premier Mahathir Mohamad, has joined forces with the opposition in an attempt to oust him.’ Photograph: Reuters

Malaysia’s new security law, due to come into force on Monday, would be alarming at any time. Its sweeping powers permit authorities to declare national security areas which are off-limits to protests, where individuals and premises can be searched without a warrant, and where killings by security forces need not result in formal inquests. Changes to the country’s criminal code, undermining the rights of suspects, are similarly concerning. Human rights groups warn that existing laws, including the colonial-era Sedition Act – which Prime Minister Najib Razak once vowed to repeal – have been used to detain and muzzle critics. The country’s police chief recently warned that protests by electoral reform group Bersih would be permitted only if participants avoided calling for Mr Najib’s resignation.

The government says the National Security Council Act is needed to protect the public from a mounting global terrorism threat. It is striking, however, that it becomes law as the prime minister faces growing pressure and planned protests over the multi-billion-dollar 1MDB development fund scandal, which has snowballed since emerging a year ago. Even his erstwhile patron, former premier Mahathir Mohamad, has joined forces with the opposition in an attempt to oust him.

Mr Najib has denied wrongdoing throughout and Malaysia’s attorney general cleared him over allegations that $681m was siphoned from the development fund to his personal bank account, explaining that the cash was a political donation from the Saudi royal family. That explanation was itself striking, even given the Saudi foreign minister’s assurances that it was a genuine gift “with nothing expected in return”, and promises that most of it had been returned.

This month the US Justice Department filed civil lawsuits seeking to seize $1bn in assets, part of the $3.5bn it alleges high-level figures and their associates stole from the fund which Mr Najib founded and, as chairman of its advisory board, oversaw. (He is not named in the documents, which refer to him as “Malaysian Official 1”.) It alleges that money intended for the wellbeing of Malaysians was diverted to luxury properties, works by Monet and Van Gogh and even the making of The Wolf of Wall Street, though the movie’s production firm has denied any impropriety.

US attorney general Loretta Lynch told a press conference that misappropriated funds were laundered through a complex web of transactions and fraudulent shell companies with bank accounts in countries around the world; “We cannot allow the massive, brazen and blatant diversion of billions of dollars to be laundered through US financial institutions without consequences,” a colleague declared. One important question is how well such entities performed their duties. The US investigation – like the research of Clare Rewcastle Brown, whoseLondon-based Sarawak Report has doggedly pursued concerns about 1MDB – is to be commended. This case concerns assets that rightfully belong to Malaysia’s 30 million citizens, but what has happened to them, and how, should concern the rest of us, too.