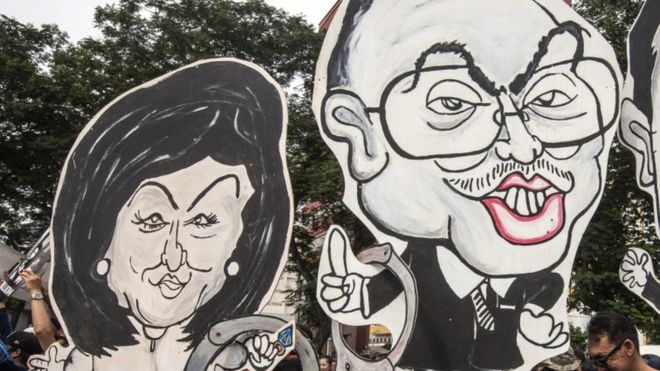 “But I have also said, why didn’t the DOJ name him by his proper name. That’s because he is not part of this investigation.

“There have been other people who are named…. and the Department of Justice will take this to the courts and the courts will decide.”

What is the 1MDB scandal?

In itself, the admission simply confirms what most Malaysians – at least those who know about the 1MDB scandal – already believe. The DOJ’s report led to outrage on social media, with many netizens cheekily asking for the real “Malaysia official 1” to “please stand up”.

The frustration is slowly but surely spilling out onto Malaysia’s streets. Just a few days ago, a protest organised by students and activists called for the arrest of Malaysian Official 1.

Carrying posters of Mr Najib with the words “MO1” emblazoned on them, protesters said he must step down even if he isn’t directly involved in the fraud, because it took place under his watch.

Mr Najib set up 1MDB in 2009 and, until recently, was the chair of the advisory board. The fund was supposed to promote economic development in Malaysia, but ran into billions of dollars of debt and has been considered a financial failure.

But when I asked Mr Dahlan whether the prime minister should take responsibility for the fund’s failure, the answer was a categorical no.

“He has taken responsibility, by putting a new team in place at 1MDB,” he said. “But just because a few NGOs and the opposition are calling for him to vacate his seat, he shouldn’t do that. That’s too much.”

It is true that the protest was much smaller than organisers expected and it’s unclear whether any more will follow.

It’s unlikely that Mr Najib will be hurt by these sorts of demonstrations: for now at least, they’re too insignificant to make much of a difference.

But there has been some damage to his international reputation, and that of Malaysia’s, according to those who want him out.

Former Prime Minister Mahathir Mohamad is leading the charge. “Today people laugh at Malaysia, they say what has happened to your country?” he told me in an interview in his office in Kuala Lumpur.

It’s hard not to be sceptical about his sudden distaste for the current leader. After all, Mr Najib was handpicked and groomed by Mr Mahathir as his successor.

And Mr Mahathir’s critics argue that the corruption that he is now attacking flourished under his watch.

“Yes there was corruption. Corruption is everywhere,” he said to me. “I admit there is some corruption in my staff – but not me. During my time, we don’t have corruption on this scale, described by the US DOJ as the biggest fraud they have ever seen.”

Mr Najib’s supporters say that Mr Mahathir’s desire to push him out is driven by hidden motives – that he wants to secure a political legacy for his son, and that he is using the 1MDB case as a way to fuel anger amongst the Malaysian public.

If it wasn’t 1MDB, they say, it would be something else.

But the fact remains that Mr Najib’s reputation is now intricately tied to the way the 1MDB saga pans out.

For now, Malaysians appear to be resigned to the news that their prime minister was in some way involved in this scandal.

And the vast majority of Malaysians who live in the countryside have yet to fully understand the financial complexities behind what happened at 1MDB.

But elections are expected in the next 12-18 months. This battle is just beginning.