MALAYSIA will allow Beauty and the Beast to be shown in cinemas, after reports on Monday its release would be postponed indefinitely.

Disney Malaysia confirmed the premiere and the film’s release on Thursday would be delayed after objections from the Malaysian Censorship Board (LPF).

Release of the film, starring Emma Watson and Dan Stevens, was reportedly on hold for “internal review” by authorities.

SEE ALSO: Film censorship is being used to quell discourse in Malaysia

Later in the day, however, LPF chairman Datuk Abdul Halim Abdul Hamid told The Star Online “the film has been approved with a P13 parental guidance classification, with a minor cut.”

The authorities had made a minor edit on the film after concerns about a “gay moment.”

The GSC website still reads “movie not available” where the synopsis of Beauty and the Beast should be. 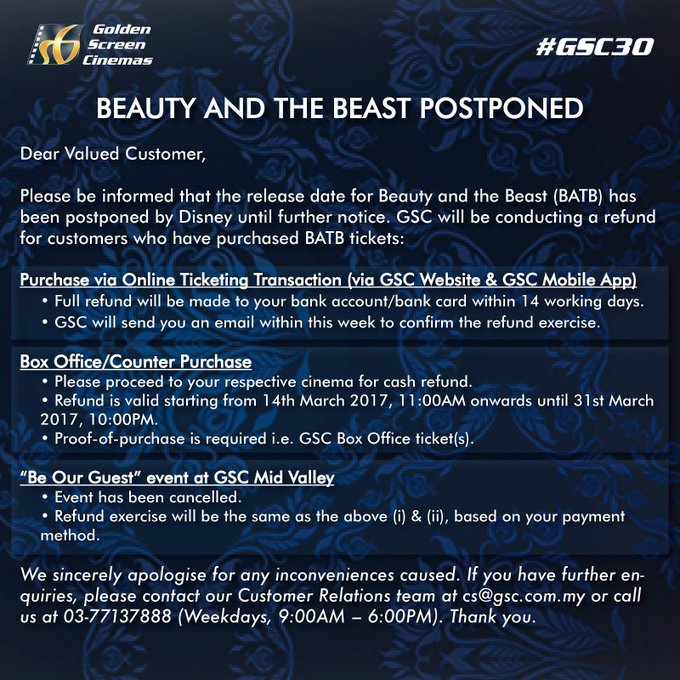 The country has also in the past banned or censored certain films deemed to hurt Muslim sensitivities.

These include movies that depicted prophets of Abrahamic faiths, such as the 1998 animated musical Prince of Egypt.

It was revealed later the edits were made before local censors saw the film.

But Malaysia’s Tourism and Culture Minister Nazri Aziz told Asian Correspondent he found the uproar over Beauty and the Beast to be “ridiculous” and tantamount to “moral policing”.

Nazri said many other themes that might also offend Muslim viewers were allowed by censors.

“Don’t tell me Muslims aren’t sensitive about shooting,” he said.

“In most movies, the storyline includes rape scenes, murder scenes. But that you allow? Those things, like shooting, for example, they are all against the law and yet we allow that. We should be consistent.”

Sooo, Beauty and the beast got banned in Malaysia because there’s a gay character. But, there’re tons of rape scenes in local movies ??

Many Malaysian netizens took to social media to air their annoyance at the postponing and subsequent censorship of Beauty and the Beast.

Totally disagree with ” Beauty and the Beast is banned in Malaysia ”

Malaysia has so many things to improve on but we choose to look at the petty stupid stuff like banning Beauty and the Beast. How disgusting.

“Homosexuals exist, they’ve been around even without showing the film. I don’t think if you show the film, there will be more homosexuals around,” Nazri said.

“We should grow up. There are many other things we should be more concerned about. Let our people make their own choices.”

In neighbouring Singapore, the Anglican church has issued an “alert” to parents regarding “homosexual content”, signalling the film diverged from Disney’s usual association with “wholesome, mainstream values.”