MALAYSIA on Thursday launched a special court to handle sexual crimes against children, the first of its kind in Southeast Asia, local media reported.

The setting up of the court is in tandem with the country’s recently-approved Sexual Offences Against Children Act 2017, which will come into effect soon. The court will also hear its first case on July 4.

“The special guidelines to be developed should meet the needs and requirements of child witnesses and be in accordance with the best practices in other countries,” Najib was quoted as saying. 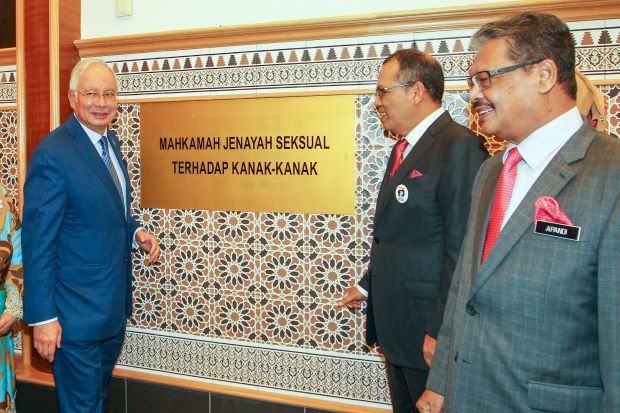 Najib also mooted the formation of a working committee to draft guidelines on how best to handle sexual crime cases involving children. The working committee proposed is to comprise the courts, the Attorney General’s Chambers, the Women, Family and Community Development Ministry and other children’s organisations. The prime minister also suggested enlisting the help of the United Nations Children’s Fund (UNICEF).

He said it is hoped that with the new court, cases of sex crimes involving children could be resolved within a year. At present, such cases could take up to several years.

“If we are to observe, the situation in cases involving children is unique.

“For example, in the case of a child who faces sexual abuse at the age of 16 and the case prolongs until the child is 18 and becomes an adult, the feeling to adduce evidence dissipates,” he said.

“As such, it (the court) is of significance to expedite the hearing and resolve the case.”

In April, Malaysia’s Parliament passed the Sexual Offences Against Children Bill 2017 after months of campaigning for stiffer penalties against offenders following reports on the prevalence of child sexual grooming cases in the country.

Last year, the Southeast Asian nation was rocked by the high-profile conviction of British national Richard Huckle who was given 22 life sentences for child sex abuse and paedophilia, offences he reportedly committed in Malaysia and Cambodia.

Touting himself as a pious Christian, a freelance photographer, and an English teacher, Huckle admitted to preying on the children, who were aged between six months and 12 years, over the course of nine years.

Shortly after Huckle’s conviction, Interpol revealed that Malaysia ranked third highest among Southeast Asian nations for the ownership and distribution of child pornography.