Trying to rally support for the oft-criticized Trans-Pacific Partnership, President Barack Obama said it will go a long way to improving human rights conditions across the globe.

Specifically, he said during a press conference with Singapore’s Prime Minister Lee Loong, it will curb human trafficking in Malaysia.

We’ve rated two other claims from this press conference (a Mostly True on tariff cuts and a Half True on Vietnamese labor rights). Here, we look at the situation on the ground in Malaysia. END_OF_DOCUMENT_TOKEN_TO_BE_REPLACED 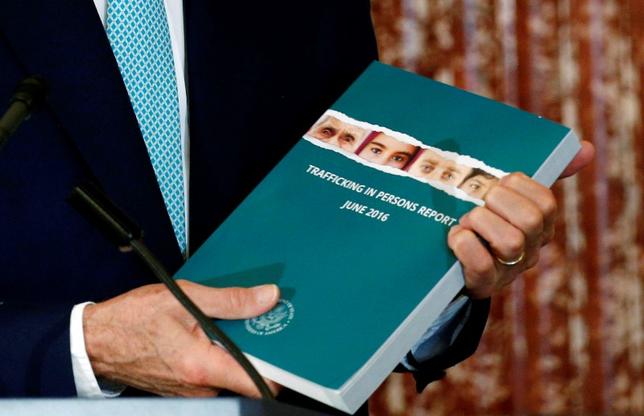 On Tuesday, lawmakers again questioned why Malaysia had not been downgraded. “It’s hard to understand that they’ve made progress in 2016,” Senator Ben Cardin, the top Democrat on the Senate Foreign Relations Committee, said. END_OF_DOCUMENT_TOKEN_TO_BE_REPLACED

Tenaganita and other NGOs have criticized the Malaysian government for allegedly not doing enough to shield people who are trafficked into the country from being exploited or abused in other ways on Malaysian soil, and who are among an estimated population of two million undocumented foreign migrants in the country. END_OF_DOCUMENT_TOKEN_TO_BE_REPLACED

Ranked on Tier 2 of the TIP Report, Malaysia has yet to “demonstrate overall increasing anti-trafficking efforts compared to the previous reporting period”.

The Trafficking in Persons (TIP) Report, which is issued annually by the US State Department’s Office ranks governments based on US perceptions of their efforts to acknowledge and combat human trafficking.

The TIP report gives an indication of the state of human trafficking in the country and the government’s efforts in combating it. The rankings are sometimes controversial, with allegations that political and trade considerations influence the ranking that is accorded to a country. For example, in 2015 when Malaysia’s ranking went up one notch from Tier 3 (the worst case) to Tier 2 in the Watch List, many viewed it as a concession by the US government to enable Malaysia to become party to the Trans Pacific Partnership (TPP) trade agreement.

While the rankings may be subjective and susceptible to influence by trade and political considerations, it is worthwhile to study the contents of the report (which are more factual) to obtain an indication of the areas where improvements are needed.

The TIP report 2016 states quite bluntly that “the government did not demonstrate overall increasing anti-trafficking efforts compared to the previous reporting period”. The key areas of concern highlighted in the TIP report are as follows: END_OF_DOCUMENT_TOKEN_TO_BE_REPLACED

Speaking on the 2016 Trafficking in Persons (TIP) Report of the United States, Nayagam said that Malaysia does not deserve its recent Tier 2 Watch List ranking.

“To be honest, I think Malaysia deserves a Tier 3 ranking (the lowest rank) because we are not moving forward fast enough,” he said, adding that human trafficking is still a big problem in the country.

However, Nayagam said that the reason why Malaysia cannot be in the Tier 3 watchlist is because they are a signatory to the Trans-Pacific Partnership Agreement (TPPA).

In June last year, the American congress passed a bill that barred them from entering into trade agreements with nations on tier-three of the list.

“This proves that the report has lost its taste, there’s no bite,” said Nayagam.

END_OF_DOCUMENT_TOKEN_TO_BE_REPLACED Migrants including Burma’s Rohingya Muslims wait to be rescued by Aceh fishermen on the sea off East Aceh, Indonesia, in May 2015. (S. Yulinnas/Associated Press)

WITH ANOTHER year comes another report from the State Department on trafficking in persons and another shocking account of human rights abuses around the world: Laborers sweat past nightfall in brick kilns for no pay. Girls are trapped in hotel rooms with barred windows and are repeatedly raped by whomever their captors let in the door. Young boys are made to beg for money on the streets — but maimed first to increase profits.

The study, which the State Department released last week, is an annual chiding for countries that fail to crack down on abuse within their borders. It’s also an annual opportunity to demand that those countries change. So it is important that the report reflect reality.

Last year, when Malaysia was promoted from lowest-level Tier 3 to the Tier 2 watch list, human rights advocates said politics had snuck their way into the report; Malaysia is regarded as an important ally by the Obama administration. This year, the country stayed where last year’s rankings put it. Thailand ascended to the Tier 2 watch list, and Burma and Uzbekistan were demoted. END_OF_DOCUMENT_TOKEN_TO_BE_REPLACED

06/30/2016. The State Department’s annual Trafficking in Persons report is a powerful tool to hold governments accountable for their failures to prevent human trafficking. The report ranks governments worldwide into one of three tiers based on their efforts to combat and prevent trafficking and forced labor, with the lowest ranking of tier three carrying economic sanctions. The release of the 2016 report has been met with mixed reviews from labor and anti-trafficking groups.

In recent years, the administration has politicized the ranking of certain countries to fit its trade and economic agenda rather than prioritizing people’s right to live in freedom. Last year, after the State Department upgraded Malaysia—a potential Trans-Pacific Partnership trading partner—from tier three, AFL-CIO President Richard Trumka said: “The administration appears to be resolute in forging a flawed trade agreement with countries that currently violate fundamental labor and human rights.”

This year, the administration doubled down on the mistake and failed to downgrade Malaysia, despite reports that grueling working conditions for migrant workers remain the norm. Indeed, the Nepal Embassy recently reported that some 2,945 Nepalese migrant workers died on the job in Malaysia in the past 10 years—an average of nearly one worker per day. END_OF_DOCUMENT_TOKEN_TO_BE_REPLACED

KUALA LUMPUR: Asean will be coming out with a standard operating procedure (SOP) for programmes to combat terrorism in the region.

And Malaysia will be counting on its long history of dealing with such problems – going all the way back to 1948 – to help develop the SOP.

“Malaysia will be hosting a conference on deradicalism in the Asean region on Jan 25 and 26 next year, in which Asean, along with eight dialogue partners, will discuss three main themes and present eight papers on the aspects of terrorist rehabilitation.

“This includes approaches like psychology and engagement programmes with those arrested for terrorism, including a proposal for engagement programmes involving ­families and loved ones, so the rehabilitated terrorists can be accepted into society again,” he told a press conference after chairing the Special Asean Ministerial Meeting on the Rise of Radicalisation and Violent Extremism (SAMMRRAVE) here yesterday. END_OF_DOCUMENT_TOKEN_TO_BE_REPLACED

In the weeks leading up to a critical annual U.S. report on human trafficking that publicly shames the world’s worst offenders, human rights experts at the State Department concluded that trafficking conditions hadn’t improved in Malaysia and Cuba. And in China, they found, things had grown worse.

The State Department’s senior political staff saw it differently — and they prevailed.

A Reuters examination, based on interviews with more than a dozen sources in Washington and foreign capitals, shows that the government office set up to independently grade global efforts to fight human trafficking was repeatedly overruled by senior American diplomats and pressured into inflating assessments of 14 strategically important countries in this year’s Trafficking in Persons report. END_OF_DOCUMENT_TOKEN_TO_BE_REPLACED