The Trans-Pacific Partnership (TPP) may yet be the agreement that most transforms national regulatory systems. It could be even more transformative than the Uruguay Round (1986–1994) that delivered the WTO and the 1994 Agreement on Trade-Related Aspects of Intellectual Property Rights (TRIPS). But much depends on if, and when, China joins the TPP. 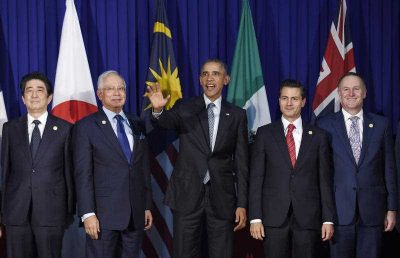 So far 12 parties have signed a text of the TPP — Australia, Brunei, Canada, Chile, Japan, Malaysia, Mexico, Peru, New Zealand, Singapore, the United States and Vietnam. But each party has to now shepherd this text through their respective domestic treaty-making processes. The TPP does not need the approval of all its signatories to come into force. Six or more signatories making up at least 85 per cent of the combined GDP of the original signatories would be enough to give the TPP legal force. But the United States, with its US$18 trillion GDP, does have to be part of the six. END_OF_DOCUMENT_TOKEN_TO_BE_REPLACED

The case will be heard by High Court (Appellate and Special Powers) judge Justice Hanipah Farikullah.

Speaking to reporters after the parties met senior assistant registrar Nurul Aini Yahya in chambers on Tuesday, Pua’s lawyer Joanne Chua said that the court fixed March 29 for them to file written submissions for the judicial review proceedings.

Chua said Nurul Aini has set March 29 and April 18 for case management to ensure all documents in order for the hearing. END_OF_DOCUMENT_TOKEN_TO_BE_REPLACED

END_OF_DOCUMENT_TOKEN_TO_BE_REPLACED

Honey Tan (pic), co-counsel for Noorfadilla Ahmad Saikin, said that there are no legal requirements in Malaysia to disclose pregnancy and that it is also not illegal to ask job candidates if they are pregnant. — Picture by Choo Choy May

KUALA LUMPUR, Feb 17 — The Shah Alam High Court decision to slash an award of RM300,000 in damages to RM30,000 for a woman in a landmark gender discrimination lawsuit against the government shows there is need to conduct gender sensitisation training, the woman’s lawyer said.

Honey Tan, co-counsel for Noorfadilla Ahmad Saikin, pointed out that when her client’s case was called for decision in 2014, it was Shah Alam High Court deputy registrar Ahmad Rizki Abdul Jalil who decided on the quantum of the award.

The sum of RM300,000, she said, was never suggested during submissions.

“So to say that there was ‘profiteering’ is quite shocking,” Tan told Malay Mail Online.

“It is not the reduction in the amount of damages that is shocking, but the judicial commissioner’s comments and reasons for her decision.

“It shows clearly that training in gender sensitisation, understanding the applicability of international law and standards, knowledge of Cedaw and understanding state obligations in implementing the principles in Cedaw are urgently needed,” the lawyer said, adding that her client would appeal the ruling. END_OF_DOCUMENT_TOKEN_TO_BE_REPLACED

PETALING JAYA, 17 Feb 2016: While Kuantan may be seeing some improvement to its environment following the moratorium against bauxite mining, academics say the long-term damage may be much harder to fix.

United Nations University research fellow Prof Dr Jamal Hisham Hashim said unless the mining areas were rehabilitated, a temporary ban on bauxite mining would not be enough to fix things.

He said rehabilitation meant measures like refilling mines and repairing damage to roads and neighbourhoods near mines.

“Rehabilitation isn’t likely, especially not by illegal miners. They can leave it to the land owners to clean up the mess,” he said, during a forum on sustainable bauxite mining at University Malaya here on Tuesday. END_OF_DOCUMENT_TOKEN_TO_BE_REPLACED

Unregulated bauxite mining in Pahang had caused severe environmental pollution and raised concerns over the health of those living in affected areas. — Bernama pic

PETALING JAYA, Feb 17 — Poor practises in bauxite mining in Pahang have exposed the people in the affected areas to various health threats, say scientists and academics studying the issue.

“Almost all the water for consumption in Kuantan is drawn downstream from the mines.

“The full impact of this is not appreciated as water samples drawn for testing by the Department of Environment were not from rivers used for drinking water,” he said.

Speaking at a forum on bauxite mining organised by Malaysian Academy of Science and University Malaya yesterday, Maketab warned that a rash of severe health conditions could break out.   END_OF_DOCUMENT_TOKEN_TO_BE_REPLACED