KUALA LUMPUR, Aug 7 ― The Attorney-General’s Chambers have submitted an appeal against dancer Bilqis Hijjas acquitted of insulting behaviour by dropping yellow balloons during an official event attended by Prime Minister Datuk Seri Najib Razak and his wife in a mall August last year.

A notice of the appeal which was accepted by the court registrar on July 14 was sent by post to Bilqis who received it on Friday.

The letter stated that the prosecutors were “not satisfied” with the judgement to free Bilqis by Magistrate Mohd Faizal Ismail on July 1.

When contacted, Bilqis said she was disheartened  by the AG’s decision of wanting to pursue the case despite being acquitted.

“I’m very disappointed that the matter is continuing, as I believe the judge in the first trial provided a very clear and comprehensive ruling.

“To me, this appeal seems like a nuisance suit, and a continuing waste of public resource, with very little hope of public gain,” she told Malay Mail Online yesterday.

The 37-year-old added that she had no other details on the matter but has forwarded the letter to her lawyer Eric Paulsen. 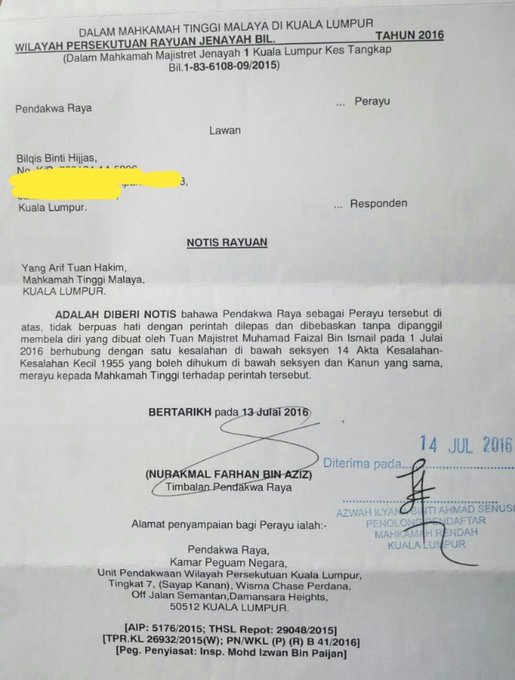 Charged under Section 14 of the Minor Offences Act 1955 last September 23, Bilqis faces a maximum RM100 fine over alleged “insulting behaviour” with the purported purpose of inciting anger that may cause a disturbance of peace.

The charge did not specify who was alleged to have been insulted.

In the incident last August 31 at around 3.15pm at Pavilion, several yellow balloons printed with the words “Free media”, “Democracy” and “Justice” were said to have been released from the mall’s fifth floor to the second floor where the Kuala Lumpur International Arts Festival’s opening ceremony was held.

During the trial, several of the prosecution’s witnesses had associated the yellow colour of the balloons to the two-day Bersih 4 rally last August 29 and August 30 by electoral reform group Bersih 2.0, where protesters had sought the prime minister’s removal.