KUALA LUMPUR: An exhaustive, two-year investigation by the New Straits Times Special Probes Team into the mass killings in Wang Kelian in 2015 that shook the world, has revealed startling new evidence, which suggests a massive, coordinated cover-up.

One of the biggest revelations was that the human trafficking death camps had been discovered months earlier, but police only announced the discovery on May 25.

Another huge question mark was why did police order the destruction of these camps, which were potential crime scenes, before they could be processed by forensics personnel?

The in-depth investigation was sparked by a number of burning, unanswered questions that dogged the team, among them, why had the initial discovery of these death camps been kept hush-hush; and who gave the order to sanitise and destroy the crime scene; and, why.

In the hunt for the truth, the team pored over scores of official documents and reams of reports. The team checked and re-checked the facts, sought corroborative witnesses and verified facts through multiple, independent sources — all to build an airtight case.

During the course of this investigation, the team traced and interviewed countless personalities who were directly involved in what had been, and still is, the most horrific case of human trafficking, torture and mass killings to have occurred on our soil.

These sessions also took the team back to the crime scene where evidence of the victims’ torture and suffering, including empty graves, were all around us.

The three-hour hike to the campsites took longer than it should as we were warned of syndicate members who could still be lurking. Communications were strictly in hushed tones.

All told, more than 150 remains of foreigners, believed to be human trafficking victims, had been exhumed from shallow, unmarked graves in Wang Kelian.

Refusing to be a part of what they described as a “systematic cover-up”, our sources opened up on what had really transpired in the dense, unforgiving jungles of Perlis — contradicting the “official version” of events.

The evidence secured by the team supported their story. The sources, including those who were directly involved in the case, had come into the open and claimed that there had been some “serious redacting” in reports and papers filed in the course of investigations.

One shocking discovery was that the authorities, particularly the Perlis police, knew the existence of these jungle camps in Wang Kelian in early January 2015, but had allegedly chosen not to do anything about them until half a year later.

Police, at a press conference announcing the “discovery”, were not ambiguous when they said that they believed the camps were only vacated three weeks prior.

We will never know how many innocent lives could have been saved if they had acted earlier. 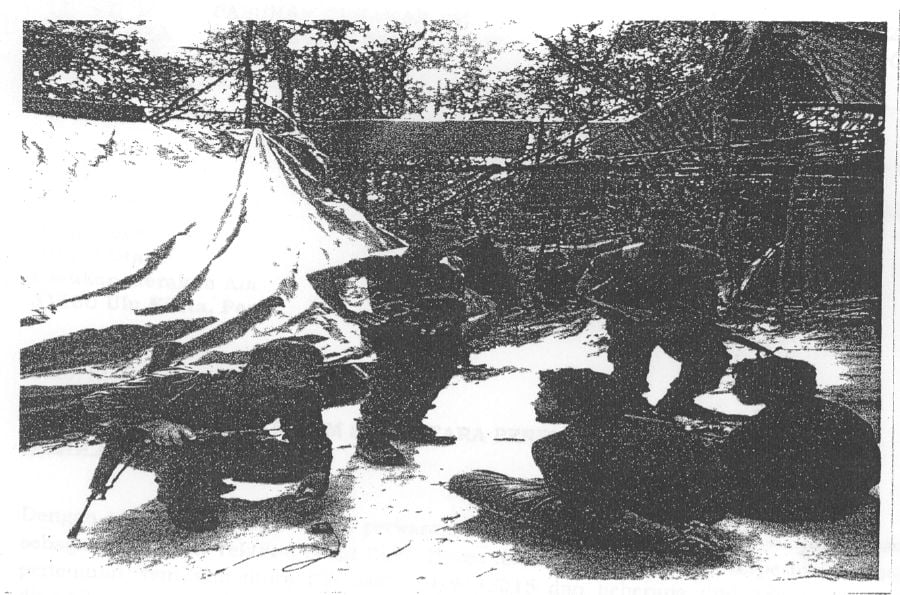 The raiding team with foreign men in custody at the camp where the first mass graves were found. Pic drawn from NST Online.

Malaysian authorities, following the discovery of human trafficking camps and mass graves by the Thais on May 1, 2015, checked our side of the border and discovered, on May 24, 139 graves, together with some two dozen similar-looking squalid camps.

A report lodged by one of the police’s own, identified as ASP J.K. on Jan 19, 2015, at 10.15pm, stated that two General Operations Force (GOF) men had, during “a routine patrol” at a “dumpsite” somewhere in middle of the jungle of Wang Kelian State Park, had “stumbled on an observation post” on a tree. They probed further and made a second discovery — a trail leading into the Mata Ayer forest reserve.

They called for backup and were joined by a 30-man raiding team. They followed the trail to the top of Bukit Wang Burma.

There, before them, was a 30mx30m campsite. That was the first time a human trafficking racket operating in the Nakawan Range was discovered.

The raiding team saw six cages, where scores of men and women were packed inside under the watchful eyes of foreign men armed with M-16 rifles. The gunmen also conducted roving patrols around the campsite.

The team moved in about 4.30pm that day and detained 38 human trafficking victims (22 Bangladeshis and 16 Myanmar).

According to the official after-action report, an estimated 150 individuals, who were caged up earlier, had “escaped into the jungle” during the raid.

How the men and women managed to “escape” the assault team remains unknown. The armed syndicate members also miraculously joined their captives “and escaped into the jungle”.

The GOF raiding team’s tactical procedures and protocols were not made clear in the report. The normal practice would be to first establish a cordon sanitaire around the camp periphery to prevent “squirters” from escaping.

Those rounded up were immediately brought down to the Padang Besar police headquarters for processing at 9.30pm.

The next day, the officer who led the assault team met the state deputy police chief.

An order to destroy the crime scene was issued, and the team returned to the site the next day to carry out the instructions.

It was during this mission that the men discovered the first 30 graves.

Jan 19, 2015 was when the Wang Kelian tragedy and the mass graves were discovered; not on May 25, as we were led to believe.

These men later filed an exhaustive report. They said syndicates in Thailand and Malaysia were believed to be working closely in running a lucrative, illicit business virtually unmolested, and fuelled by demand for illegal labour from as far away as Pahang and Johor.

The report also identified a local, suffering from vitiligo — who had been acting as the middleman. Eleven more locals, whose role was to “deliver the goods”, were also identified.

The discovery of foam was an indication that the jungles were inhabited, and this triggered the alarm on the existence of human trafficking camps. Pic drawn from NST Online

Meanwhile, an independent report from another police team poked holes in the one presented at the meeting with the state’s second-in-command. It also contradicted the police report lodged by ASP J.K.

The new report suggested that the officer in question never dispatched 30 men as claimed, but only eight.

During the operation, the eight-man team was split into two. One was led by the GOF trooper who first suspected that something was amiss, and the other by an officer specially sent in for the mission. They took different routes to the camp, according to the report.

However, the assault team led by the officer never reached the scene. As the other team laid low, waiting, they heard one of the camp guards shouting, “Run! the police are here!”

It was between three and five minutes later that the other team with the officer showed up. The officer had allegedly given an order to pull back.

The report also revealed that the officer who did the briefing on the raid had concealed the fact that the graves were found on that very day, and not as they were destroying the crime scene.

“In fact, the campsite was not fully destroyed. It was very minimal. Only the tents and a portion of the guard posts were burned.”

THE OTHER SHOCKING FIND

The NST Special Probes Team was let in on a March discovery of another camp in Bukit Genting Perah, now known as one of the largest human trafficking camps in the hills here.

This startling find was revealed by a team of highly-trained men, including commandos, who were involved in a snatch-and-grab mission.

The orders that were cut for this secret mission stemmed from the deafening silence that followed the first discovery of the death camps.

Taking position in the dark of night, the small team waited and shadowed their adversaries — the camp guards — waiting for the right moment to pounce.

One by one, the commandos would grab and quickly overpower their targets, and then slip stealthily back into the cover of darkness.

With all five foreign men in custody, the team regrouped and made their way down the hill. The trek back to home base took three hours. Halfway down the challenging terrain, with the suspects in tow, members of the strike team heard gunshots coming from the camp. 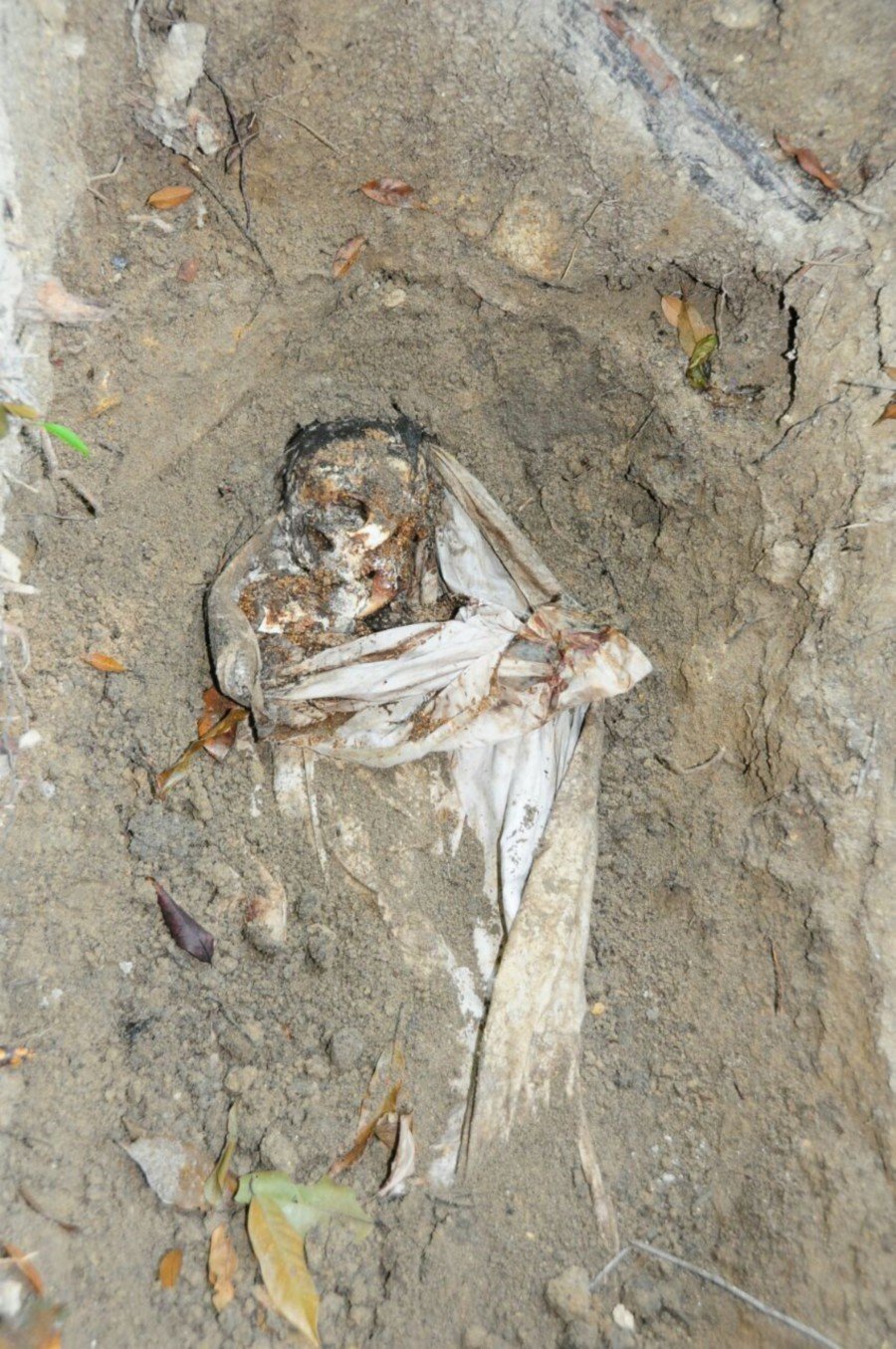 This was the first human remains to be discovered near the camp in Wang Kelian. Pic drawn from NST Online.

“We knew immediately that the syndicate members had realised that their men were missing, and that their operation had probably been discovered,” a source with direct knowledge revealed.

News of this discovery and the arrest of the five men during the covert ops by the commandos from Perlis was never made public.

The status of the five suspects remains unknown, although the NST Special Probes Team was made to understand that many of them could have been merely charged with immigration offences.

It is also not known if a follow-up raid was ever made.

The report on the Bukit Wang Burma raid stated that the local middleman, who had been taken into custody, had admitted to greasing the palms of personnel in border security agencies to ensure that his operation could continue unmolested.

“Many of these agencies are highly involved in human trafficking, and this is a serious trans-border crime that cannot be eliminated by arresting illegal immigrants and deporting them.

“For as long as there are authorities working hand-in-glove with these syndicates, eradicating this problem will be an uphill battle,” the document stated.

For the record, the document was carbon-copied to the state police chief and his deputy, the state National Security Council, the Perlis and Kedah Border Intelligence Unit and the head of the Third Battalion of the GOF, among others.

The NST Special Probes Team had, on one occasion, cornered the Deputy Inspector-General of Police Tan Sri Noor Rashid Ibrahim to reveal to him what we knew about the case, and if he had any explanation. He listened to every word, but refused to comment. We were stonewalled.

Trying a different tack, the team sent a number of text messages to the then inspector-general of police Tan Sri Khalid Abu Bakar. They, too, went unanswered.

Finally, the team managed to track Khalid down at an event at a bowling alley in the capital, and asked him about Wang Kelian.

After listening to us, Khalid finally relented and agreed to talk, but on one condition — that the conversation not be recorded. His ADC made sure of it.

The team had a number of burning questions, not least of which was why had the discovery of the death camps been kept a secret. What was the overwhelming justification in allowing the slaughter of scores of innocents, including women and children, to continue unabated?

Khalid was visibly apprehensive when confronted with these questions. It took a while before he finally spoke.

And when he did, his voice betrayed the enormity of what he was about to tell us.

The NST Special Probes Team is bound by journalistic ethics in honouring the condition Khalid imposed, which was not to publish what he had told us.